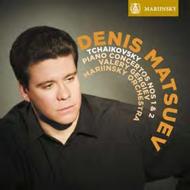 Tchaikovsky - Piano Concertos No.1 & No.2

Since winning the 11th International Tchaikovsky Competition in 1998, Denis Matsuev has established a reputation as one of Russia's leading pianists. His début release on the Mariinsky label, featuring Rachmaninovs Piano Concerto No.3 and Paganini Variations, received widespread acclaim. His second Mariinsky release featured piano concerts by Shostakovich and Shchedrin, and was awarded Clef du Mois by ResMusica and ***** by Audiophile Audition.

For his third release, Matsuev turns to the music of Tchaikovsky, with the two Piano Concertos.

His first Piano Concerto is one of his most popular works: Tchaikovsky balances core motivic elements with a sense of lyrical spontaneity to create a technically challenging but instantly appealing work.

The Piano Concerto No.2 was dedicated to pianist Nikolai Rubinstein, with whom the composer had a close working relationship. Tchaikovsky wrote: I want to dedicate it to N G Rubinstein in recognition of his magnificent playing of my First Concerto and of my Sonata, which left me in utter rapture after he performed it for me in Moscow. After a tremendous piano cadenza in the first movement, Tchaikovsky allows other instruments to shine, with prominent solos for violin and cello in the second movement.

"In both these concertos it is hard not to enjoy Denis Matsuev's playing and that of the Mariinsky Orchestra under Valery Gergiev, if only for the sheer enthusiasm and larger-than-life presence. Even in the highly wrought passages in the massive Second Concerto, which he plays in Tchaikovsky's own revision, Matsuev copes with the fistfuls of notes with real relish, while there's refinement, too, in the slow movement: with its violin and cello solos, it effectively becomes a triple concerto at times." - Andrew Clements, The Guardian