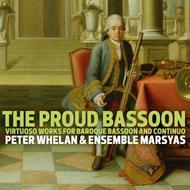 The Proud Bassoon' marks the debut solo recording of Peter Whelan, singled out for praise in his performances with the Scottish Chamber Orchestra and Ensemble Marsyas.

This unique album is a collection of the very best of the virtuoso solo music composed for the galant French styled baroque bassoon. Included are a wide range of works composed for the court, the Opèra, for the home and from the street, brought back to life by Peter and special guests Ensemble Marsyas.

The basson or bassoon inspired many now forgotten high-level artworks by the greatest French composers. As the leaders in musical fashion, they in turn influenced their German contemporaries who were inspired by the elegance and lyrical possibilities of the new French instrument, especially in the expressive tenor register.

This recording includes a world-premiere of the Irish Air, Eileen Aroon, arranged for bassoon and continuo by Handel's first violinist in Dublin, Matthew Dubourg. This beautiful melody subsequently became very popular in Europe and inspired compositions by both Haydn and Beethoven.

Principal bassoon with the Scottish Chamber Orchestra since 2008, Whelan has received frequent praise from the critics: Peter Whelan combines agility with lyricism and laid-back grace' (Gramophone). Equally at home on modern and historical instruments, Whelan has a diverse repertoire spanning over four centuries and is in constant demand as a soloist and chamber musician.