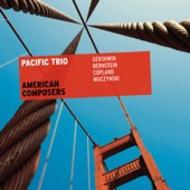 Vitebsk: study on a Jewish theme for violin, cello and piano

Vitebsk: study on a Jewish theme for violin, cello and piano

On this disc the renowned Pacific Trio perform works by composers who, in the opinion of the late Leonard Bernstein, represent the true essence of American classical music forms: Gershwin, Copland, Robert Muczynski and, of course, himself.

Founded in 1979 in Los Angeles, the Pacific Trio has played more than 1,000 concerts to audiences in the USA, Canada and Europe. Beside its concert tours, it also works as trio-in-residence at Idyllwild Arts Summer Program in Southern California. In 1986 the trio gave its New York debut at Lincoln Center and three years later recorded its first CD with trio works by Brahms and Shostakovich. The Pacific Trio is also admired for its interpretations of music by Beethoven, Dvorak, Haydn, Mendelssohn, Mozart, Schubert, Smetana and others.

Chamber music of the highest order...The musicians revealed themselves as each having prominent qualities as soloist while always understanding how to offer themselves, breathing as one breath, in service to the larger picture. The Pacific Trio earns its right to appear on the great stages of the world. - Bruchsaler Rundschau, Germany