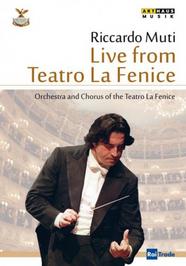 The Venetian theatre is fondly called 'La Fenice', the Phoenix, after the bird that periodically burns itself in order to rise again from the ashes as a symbol of eternal renewal  it has burned to the ground twice since it opened in 1792. Following the first fire in 1836 it was rebuilt according to the original plans by Tommaso and Giambattista Meduna on a new site, the Campo San Fantin, where it was once again rebuilt following the second fire in 1996, which reduced the theatre to its bare foundations.

When the legendary Phoenix finally rose from the ashes again in 2003, its rebirth was celebrated with a series of concerts. Riccardo Muti, musical director of La Scala, conducted the official inaugural gala concert on December 14th. In the presence of the Italian President, Carlo Ciampi, Muti conducted La Fenices choir and orchestra together with some of the best Italian singers in an unusual but truly Venetian programme.

After Beethovens overture Zur Weihe des Hauses, composed in the spirit of Handels festive music for the opening of a Viennese theatre in 1822, the concert features works by composers with strong ties to Venice: Igor Stravinskys Symphony of Psalms, Antonio Caldaras double choir Te Deum and two marches by Richard Wagner. Stravinsky was buried in Venice, Caldara was born in Venice and Richard Wagner died there.