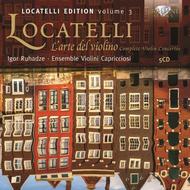 Following on from their highly acclaimed recording of Pietro Locatellis Violin Sonatas (described by Robert Maxham in Fanfare magazine as a most enjoyable, most entertaining and, at times, most moving collection), Ensemble Violini Capricciosi and Igor Ruhadze here turn their attention to the Italian composers violin concertos - works that are renowned for comprising some of the greatest technical challenges ever written for the instrument.

14 concertos span the five‐disc set, 12 of which were published as part of the infamous 'Larte del Violino' collection in 1733. Continuing in the Italian Baroque tradition of Vivaldi and Corelli (three movements, fast‐slow‐fast, with an occasional slow introduction to a fast movement), they harbour a distinctive character of their own, the most unique feature being the inclusion of 24 solo caprices - innovative additions (sometimes as long as the movements to which they belong!) whose cadenzas allow the soloist to indulge in pyrotechnical display and reveal his improvisational abilities.

Opportunities for virtuosity arent just limited to these morsels of experimentation, however - rapid leaps and stratospherically high writing characterise the set as a whole.

Locatelli might not exactly be a household name, but it should come as no surprise to hear that in his day he was an international phenomenon  a prodigiously talented violinist who is today considered the founding father of the modern virtuoso style. Long after his death and well into the 19th century, the 24 capriccios continued to be published as well as to appear in violin methods. They were the direct inspiration for Paganinis 24 Caprices, written 70 years later.

Igor Ruhadze studied modern violin at the Moscow Central School of Music before pursuing his growing interest in music of the Baroque period. A pioneer of historically informed performance, he co‐founded the Ensemble Violini Capricciosi with the aim of performing mostly virtuosic violin music on instruments from the relevant period. This marks the group's third recording for the Locatelli edition series.