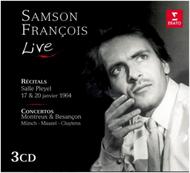 Samson François (1924-1970) is considered one of the most important French pianists of the 20th century. His musical education, provided by Alfred Cortot, Yvonne Lefébure and Marguerite Long, happily preserved his liberty and his unpredictability.

His unique sense of improvisation, which is the trademark of his recordings, blossomed even more in concerts. Those who had the chance to attend Samson François concerts recall a very special experience, where the pianist was running on the tightrope.

The recordings included in this 3 CD set have only seen the light of the CD once, in a 36 CD box-set of Samson François complete recordings in 2010. One of the concerts at the Salle Pleyel is fully dedicated to Chopin, whereas the second one features the only occasion to hear Samson François in a Mozart piano Sonata (one of his three musical fetishes, the others being Chopin and Debussy).

A third disc of Concertos shows prestigious collaborations with the greatest conductors of his time, including a moving version of the Schumann Concerto with the great old lion Charles Munch.