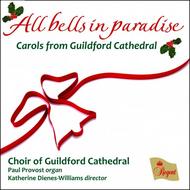 All bells in paradise: Carols from Guildford Cathedral

Baby born today (traditional)
Lo! that is a marvellous change

The holly and the ivy

All bells in paradise
Candlelight carol

What is this lovely fragrance? (traditional)

Baby born today (traditional)
Lo! that is a marvellous change

The holly and the ivy

All bells in paradise
Candlelight carol

What is this lovely fragrance? (traditional)

An exciting collection of seasonal music for Advent, Christmas and Epiphany from the boys and men of Guildford Cathedral Choir, directed by Katherine Dienes-Williams.

Included are some favourite Christmas hymns, together with recent carols from Matthew Owens, John Rutter, Will Todd and Bob Chilcott. New carols from Richard Causton, Martin Read and Philip Moore receive their first recording on this disc.

Since its inception in 1961 under Barry Rose, and under its successive directors Philip Moore, Andrew Millington and Stephen Farr, the Choir of Guildford Cathedral has won an international reputation for its singing. Katherine Dienes-Williams took over the reins and became the first female Organist and Master of the Choristers in an English Anglican Cathedral in January 2008