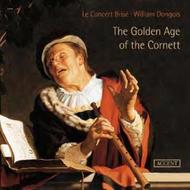 The Golden Age of the Cornett

Sonata sesta a due canti

Sonata sesta a due canti

William Dongois is one of the best-known cornett players of our time. He is able to play the repertoire of his instrument  the cornett resembles a flute in its construction, whereas its wooden mouthpiece is used similarly to that of a trumpet  with dance-like elegance, rhetorical concision and, often, even with a certain 'groove'.

On this double CD with the ensemble Le Concert Brisé, he dedicates himself to the Golden Age of the cornett: between 1580 and 1630 in Northern Italy, when the instrument enjoyed its greatest popularity amongst composers and listeners. Secular dance movements and songs of the Seicento, the Italy of the 17th century, can be heard on the first CD. William Dongois pays special attention here to the art of diminution, ie ornamentation and figuration. In the music of this period, the score served only to provide a basic framework for the improvised embellishments of the musicians.

The second CD features sacred instrumental and vocal music at St Mark's Cathedral in Venice during the time of Monteverdi, with soprano Julie Hassler and violinist Christine Moran joining William Dongois as soloists. Vocal and instrumental works alternate with each other, clearly showing that Venice stood at the centre of the development of a new style and occupied a pioneering role in all of Europe.