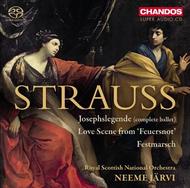 Josephslegende by Richard Strauss is based on the Biblical tale of the adventures of Joseph in Egypt after he has been sold into slavery by his brothers. Strauss started the work in June 1912. However, in a letter of 11 September, he confided that Joseph isnt progressing as quickly as I expected. The chaste Joseph himself isnt at all up my street, and if a thing bores me I find it difficult to set it to music. This God-seeker Joseph  hes going to be a hell of an effort!. Quite characteristic for Strauss, he showed far more interest in the sexual elements of the story, in which Potiphars wife attempts to seduce Joseph and ends up committing suicide. The ballet was premiered at the Paris Opéra in May 1914, where it was presented as part of a triple bill alongside danced interpretations of Rimsky-Korsakovs Sheherazade and Schumanns Papillons.

Strausss opera Feuersnot (Trial by Fire) has been interpreted as a parody of Richard Wagners idea of redemption through love. The opera takes place during the Midsummer Festival, where lovers swear their fidelity by leaping through the flames of a bonfire. In the story, the main character, Kunrad, is attracted to Diemut, a young girl who rejects his advances, with dire consequences. In retaliation, he persuades a sorcerer to extinguish all the fires in the town, stating that the only way to restore them is via the body of a virgin in heat. The opera concludes with the Love Scene, recorded here, in which Diemut sacrifices her virginity to Kunrad in order to release the spell on the fires. At the time of its premiere in 1901, the strong sexual theme was quite disturbing to its audiences.

Also on this disc is the Festmarsch, Op.1, his first published orchestral work, which Strauss wrote at the tender age of twelve. Five years later he approached the publisher Breitkopf & Härtel who initially refused to take it on. Only when the works dedicatee, Strausss uncle Georg Pschorr, indicated that he would pay for the printing costs himself did they relent. Strausss father launched the piece at a concert given by his amateur orchestra, Wilde Gungl, in March 1881.

The works are performed by the Royal Scottish National Orchestra under Neeme Järvi, who in 2012 celebrated his thirty-year recording career with Chandos Records. 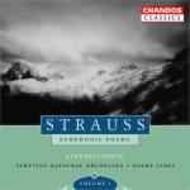 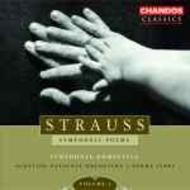 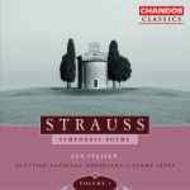 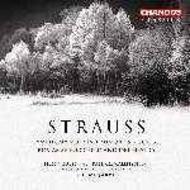 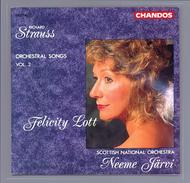