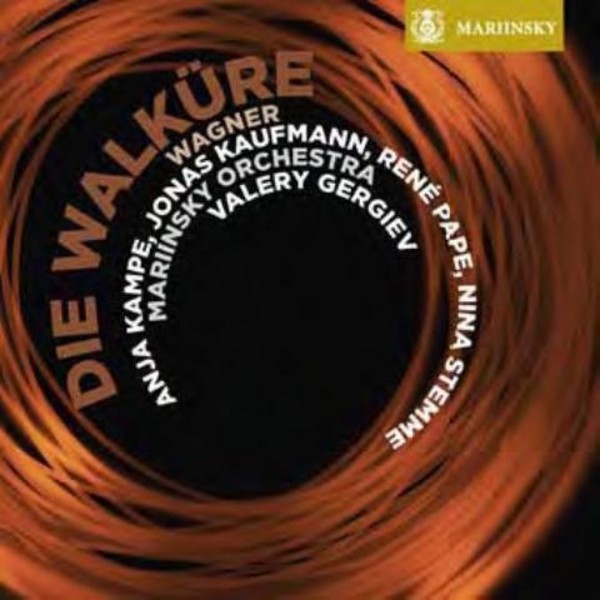 The Mariinsky label presents its most ambitious project to date and one of the most eagerly awaited musical events in a long time: the first release of Valery Gergiev conducting Wagner's epic Ring Cycle - 'Die Walküre'.

Recorded in the sumptuous acoustic of the Mariinsky Concert Hall, the cycle features a sensational cast, helping create the most finely crafted Ring cycle of modern times. 'Die Walküre' was recorded during sessions and performances in 2011 and 2012.

The Mariinsky Theatre has close connections with Wagner and his music, since the composer conducted at the theatre and was even offered the post of Music Director. It is also believed to be the first place where any of the music from the Ring was performed.

Die Walküre, together with Götterdämmerung, has long been the most popular opera in Wagner's epic Ring cycle, and it is no surprise that the Mariinsky label has chosen it to launch their eagerly awaited new recording. From the ardent lyricism of Act 1, with its human tale of the doomed love between the Wälsung twins, Sieglinde and Siegmund, to the great set-pieces of Act 3 (the Ride of the Valkyries and Wotan's Farewell), this is an opera that has touched audiences in unique ways over the years. It is arguably the emotional heart of the Ring, and a fine way to help launch this year's Wagner bicentennial.

Though the Mariinsky theatre has a long tradition of Wagner performance, it was a good decision to import the four principal singers, especially when they include some of today's finest Wagnerians. Jonas Kaufmann is the Siegmund of choice these days and, if he doesn't quite eclipse memories of some of the greatest exponents of the past, his performances are certainly worthy of comparison with the likes of James King, John Vickers, et al. Both Nina Stemme and René Pape are on formidable form as Brünnhilde and Wotan (what is it about Scandinavian sopranos that makes them such good Brünnhildes?!). Anja Kampe as Sieglinde may not be quite pure-voiced enough to be ideal, but thankfully she lacks the squally tremulousness that has afflicted some previous notable takers of the role.

The smaller roles are taken by 'local' singers. Ekaterina Gubanova is an impressive Fricka, secure of tone and less self-consciously matriarchal than some; Mikhail Petrenko's Hunding is not really dark enough to be truly menacing, though he sings well enough. The cavalry of Valkyries is probably one of the most accomplished since Solti's landmark Decca recording.

And the performance itself? Gergiev's speeds are at the broader end of the spectrum, indulgently so in places. It's as if there's a concern to make every semiquaver tell, which sometimes results in a loss of dramatic momentum. The lyrical passages in Act 1 come dangerously close to being over-egged (though the Siegmund's Winterstürme solo is excellent), and overall there is little of the visceral excitement or passion that one finds in abundance in the vintage accounts of Böhm, Furtwängler or Walter. Moments such as Siegmund's cries of 'Wälse!' and the plucking of Notung from the tree should really make one's spine tingle: they don't quite do that here. Gergiev's approach works much better in Act 2, the philosophical kernel of the whole cycle, where Wotan's great monologue receives one of its greatest performances on disc, certainly in modern times. How good it is to hear it properly sung, and by a true bass-baritone. The Todesverkündigung scene between Siegmund and Brünnhilde is again dangerously slow, but the end of the Act picks up, and Act 3 is even more impressive, with a gloriously touching close.

The Mariinsky strings and brass excel themselves (though one occasionally misses the old Soviet-style raucousness), but the woodwind seem disadvantageously balanced at times, which is a great pity, for when they do come to the fore they are truly excellent.

For a sense of visceral involvement, then, you may have to look elsewhere. But, if you can take Gergiev's speeds, for a beautifully (and at times gorgeously) sung and played modern account, this is a strong contender.