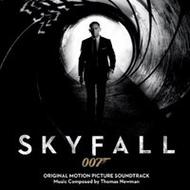 Daniel Craig is back as Ian Flemings James Bond 007 in Skyfall, the 23rd adventure in the longest-running film franchise of all time. In Skyfall, Bonds loyalty to M is tested as her past comes back to haunt her. As MI6 comes under attack, 007 must track down and destroy the threat, no matter how personal the cost.

The original soundtrack is the work of Thomas Newman, one of the most respected composers in the movie business, who has scored over fifty feature films. Newman has been nominated for an Academy Award on no less than ten occasions, nine times in the category Best Original Score and once for Best Original Song. He has won a BAFTA, two Grammys and an Emmy, and has also been nominated for a Golden Globe.

Born in Los Angeles, Yale-educated Thomas Newman comes from a prominent Hollywood musical dynasty: his father, brother, sister and uncle have all composed for the movies, and the singer-songwriter Randy Newman is his cousin.

This is Thomas Newman's first Bond soundtrack, but Newman and director Sam Mendes have worked together many times before, with Newman having scored almost all of Mendes previous films, including American Beauty, Road to Perdition, Jarhead and Revolutionary Road.

Please note: The film's title song is not included on this album. This is a score-only soundtrack.