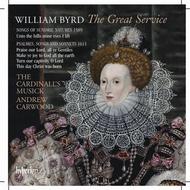 Byrd - The Great Service and other English music

Make ye joy to God all the earth
Praise our Lord, all ye Gentiles
The Great Service
This day Christ was born 'A Carroll for Christmas Day'
Turn our captivity, O Lord
Unto the hills mine eyes I lift

Make ye joy to God all the earth
Praise our Lord, all ye Gentiles
The Great Service
This day Christ was born 'A Carroll for Christmas Day'
Turn our captivity, O Lord
Unto the hills mine eyes I lift

The Cardinalls Musick are acknowledged as the foremost performers of Byrds music. Under their director Andrew Carwood they have recorded the complete Latin church music, the final volume of which won the Gramophone Record of the Year. Now they turn to Byrds English church music, a genre which shows the composer treading a path between his own innate Catholicism and the requirements of the reformed Church of England. But far from sublimating Byrds genius, this difficult situation gave rise to one of his most fertile periods.

The Great Service was described as the finest unaccompanied setting of the Service in the entire repertory of English church music upon its discovery in 1922. Written for ten voices, it is gorgeously lavish and grand - very different from the simple, unmelismatic style demanded by the Anglican clerics. Byrd did not publish it in his lifetime.

Also recorded here are five beautiful English settings on sacred themes, but probably written for performance in the home. They are masterpieces in miniature: each work is so distinctive and demonstrates Byrds genius for word-painting, his typically Elizabethan wit and, of course, his imaginative handling of polyphony.