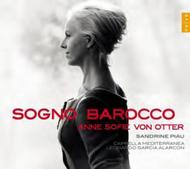 Following the best-seller 'Love Songs' with Brad Mehldau and a new recording of Berliozs 'Les Nuits dété' with Marc Minkowski, 'Sogno Barocco' is the third project from eclectic Swedish mezzo-soprano Anne Sofie von Otter on Naïve, which she toured in 2010-11.

Dedicated to early Italian opera protagonists such as Poppea, Penelope, Diana and Helena, this clever programme gathers baroque hit duets such as Si Dolce èl tormento or Pur ti miro and the previously unreleased Provenzale cantata and Rossis Lamento of the Swedish Queen.

This delicate and subtle series of baroque jewels is performed with an amazing cast, starring French soprano Sandrine Piau in 3 breathtaking duets, and baroque rising-star conductor Leonardo García Alarcón, one of the current darlings of Italian baroque.

This new release is offered with a 76-page booklet including complete sung texts and essays by Von Otter, Alarcón and musicologist Vincent Borel. It also includes 3 instrumental pieces by Cavalli in world premiere recordings.

Concert review:
Throughout her career, the Swedish mezzo has charted a wide repertory, and in this rangy baroque selection she traversed three countries with effortless fluency. The operatic extracts showed her transferring with ease her skills at melding music and drama from a theatrical context to the concert platform...In each instance, Von Otter's use of the sounds of the text to reinforce meaning was masterly.

Directed by Leonardo García Alarcón, the ensemble Cappella Mediterranea was never less than supportive...Von Otter herself remained in elegant command  not only of her voice and platform manner, but of the audience, too. - The Guardian