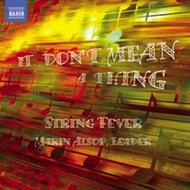 In the Mood (arr. Richard Fiocca)

Leave it to me

In the Mood (arr. Richard Fiocca)

Leave it to me

Described as a conductor who makes a difference (Daily Telegraph), and acclaimed for her artistic vision and commitment to accessibility in classical music, Marin Alsop founded String Fever in 1981. Its pioneering blend of jazz, pop and classical repertoire took critics and audiences by storm, breaking the boundaries between musical genres through remarkable versatility and a palpable sense of fun.

By no means all of Marin Alsops myriad fans will know that she performed widely as a violinist before becoming internationally renowned as a conductor, and fewer still will have had access to these recordings made by her pioneering ensemble String Fever over a remarkable 15 year period. These arrangements have more than stood the test of time, serving as a vibrant reminder of where such cross-over programming found its roots and making for a release which will be snapped up by a wide cross-section of the market.

Much in demand by many top solo artists from Billy Joel to the late Sir Yehudi Menuhin, String Fever is featured on two of Billy Joels albums: Nylon Curtain and Innocent Man. String Fever has collaborated with vocalist Mel Tormé and with top dance great Honi Coles, and has appeared as featured soloists with the Colorado Symphony Orchestra and the Eugene Symphony Orchestra.

Tchaikovsky - Symphony No. 4, Romeo and Juliet